‘JetMan’ Yves Rossy Soars Like a Superhero over Dubai!!!

Looking up into the clear blue skies of Dubai there is a futuristic new wonder of the world, “Jetman” Yves Rossy soaring like a superhero in his jet-powered wings at up to 125 miles per hour.

Rossy once piloted fighter jets and passenger jets, but his passion is winged flight. He discovered this breathtaking career after experiencing the thrills of skydiving. He moved to Dubai with a project focused on training more people to take to the skies flying with his custom creation featuring a seven foot wing span fixed to his back with a harness and mounted with four kerosene-powered jets. 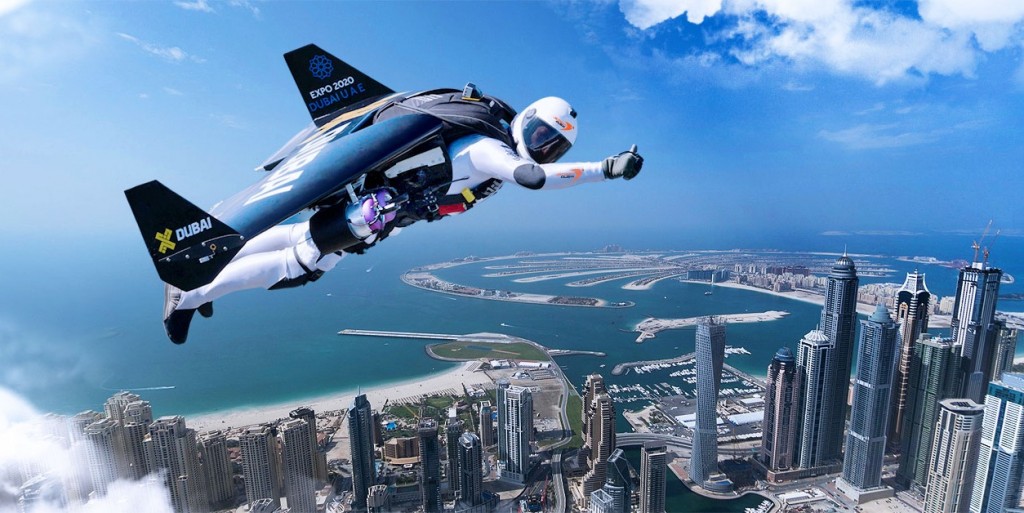 Rossy made a big announcement today at the iconic Burj Khalifa in Dubai along with XDubai Managing Director, Ismaeil Al Hashmi. He introduced his new protégé, famed 31 year old skydiver and BASE jumper Vince Reffet. Reffet is a multiple winning Freefly World Champion, adept at BASE-jumping, canopy piloting, extreme landings, wind tunnel skydiving, wingsuit flying and speed riding. Reffet will become only the second person in the world to earn the distinction of flying with the innovative Jetman wing. The adventurous duo also announced the completion of another first – a twin human formation flight – a historic moment for Jetman Dubai and for aviation globally.

In previous years Rossy has used 15 different prototypes of the jet-pack, with varying shapes, profiles and sizes. The current version, a 120 pound device has Rossy jumping out of an aircraft above 7,000 feet, free falling to gain speed and then soaring into the sky. Most of his flights last 15 minutes and cover up to 35 miles and include practicing complex maneuvers such as loops and flying in formation with airplanes. In December 2014, Yves Rossy also participated in an extraordinary formation flight over Dubai’s desert with Hungarian aerobatic champion Zoltan Veres.

The Jetman Dubai pair’s record setting twin human formation saw them fly together over landmarks like the iconic Burj Khalifa, The Palm Jumeirah and the Liwa desert. With the support of XDubai, Yves’ and Vince’s flights over Dubai will help them further develop the Jetman wing and implement technological changes to advance their dream for human flight. Jetman Dubai has already started development of its next generation wing. Jetman Dubai will also be provided with exclusive access to facilities at Skydive Dubai, including demarcated fly zones at Skydive Dubai, the Palm Dropzone and the Desert Dropzone.

“Establishing our headquarters in Dubai gives us access to world-class facilities including Skydive Dubai which will enable us to take Jetman Dubai and the development of our new wing to its next stage,” said Rossy. “Jetman is the culmination of over 20 years of innovation and has resulted in achieving my personal dream to fly free, soaring through the sky. This move to Dubai has opened the doors to the next chapter of Jetman Dubai and with the support of Xdubai, Skydive Dubai, and the Dubai Civil Aviation Authority. I look forward to sharing my knowledge with Vince Reffet. It is a privilege to have a talented athlete like Vince fly besides me high in the sky and I believe that together we will make great advances as we move towards our next big milestone.”