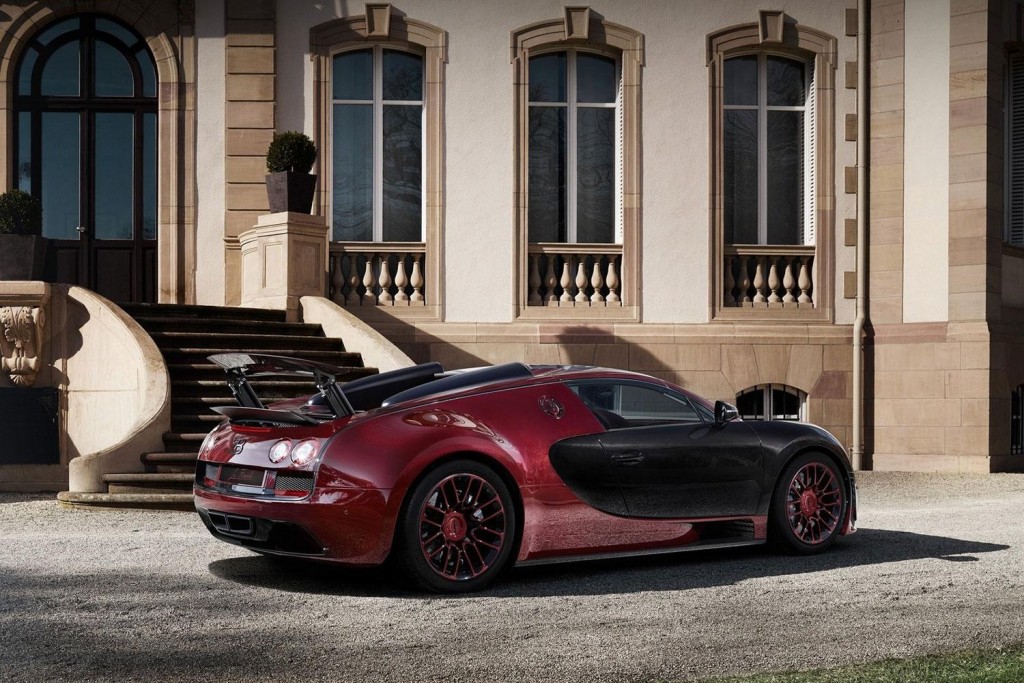 A significant chapter in the long and illustrious history of Bugatti is coming to a close at the 2015 Geneva Motor Show this week. At the Swiss event, the maker of the world’s fastest production cars is presenting its 450th and final Veyron, the Grand Sport Vitesse La Finale. As recently reported, the car has been sold to a collector in the Middle East and is likely to have cost significantly more than the average 2.3 million euros ($2.6 million) paid for a Veyron when options are included—and here it is in all its glory.

The La Finale is sharing Bugatti’s stand in Geneva with the first Veyron ever made, the car bearing chassis number one and wearing a two-tone black and red paint scheme. When designing the La Finale, Bugatti sought inspiration from this first Veyron in order to provide a visual conclusion to this chapter of Bugatti history. This can be seen in the two-tone paint finish, which instead of simple red and black hues is made up of red exposed carbon fiber and conventional black carbon fiber. The exposed carbon fiber proved extremely popular with Bugatti buyers, so much so that the brand now offers it in eight colors.

The special Veyron also features “La Finale” lettering on its exterior: once very clearly under the right front headlight and then in a slightly concealed position on the underside of the rear wing. The wheel design is also in keeping with the red and black color scheme, and as a special touch the hubcaps, milled from a single block of aluminum, feature the famous Bugatti elephant in their center.

As with the exterior, the interior of the La Finale also pays tribute to the first Veyron. It was upholsteredentirely in leather in a light beige color known as “Silk”. Unique to the car is a mix of red, which appears in the arm rests, the instrument panel, the dashboard, the side bolsters and on the steering wheel. Red exposed carbon fiber is also used in the interior: on the center tunnel, on the inserts in the center console, on the door panels and seat shells. More “La Finale” lettering can be found here, and the final touch is the Bugatti elephant on the stowage compartment cover, which has been cast in bronze and sits above the lettering “450/450”.

Being a Grand Sport Vitesse, the La Finale features the most potent version of Bugatti’s quad-turbocharged 8.0-liter W-16 and all 1,183 horsepower and 1,106 pound-feet of torque that comes with it. This affords it 0-62 mph acceleration in just 2.5 seconds and a world record top speed (for open-top production cars) of 254 mph.

“The Bugatti Veyron has shown that our engineers are capable of achieving a previously unimagined level of technical excellence, thereby opening up whole new dimensions in the automotive sector,” Bugatti chief Wolfgang Dürheimer said at the reveal. “In addition to its stunning performance, it is this everyday practicality and suitability for comfortable, luxurious travel which makes the Veyron so unique, and which sets it apart from all other supercars and hypercars on the market.”

Bugatti only ever planned to build 450 Veyrons, made up of 300 coupes and 150 open-top Grand Sports. The coupes sold out years ago, and now Bugatti has confirmed that build slots for the open-top cars are also sold out. Production of those remaining cars will come to an end later this year, with Bugatti’s factory in Molsheim, France shortly after destined to be tooled up to start production of the Veyron’s successor, a faster and more powerful model packing hybrid technology. However, that successor may not come for some time.

When asked if we’ll see the Veyron’s successor launched in 2016, Dürheimer explained that Bugatti doesn’t follow ordinary production cycles and that its cars are comparable to pieces of art, which can take time to develop. This good news is that Dürheimer confirmed any successor will need to perform better than the Veyron in every possible way.