Review: Monster 24K DJ headphones are worth their weight in gold 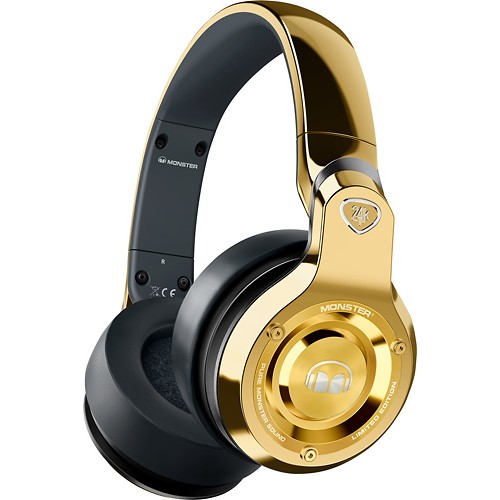 When Monster announced the 24K headphones at CES 2014, we balked (but weren’t surprised) at spending $24,000 on a pair of DJ headphones. Well, you can exhale knowing that these cans don’t actually cost that much (they’re gold-painted, not gold-plated), but the real price tag certainly isn’t a steal at $299.99. Regardless, the sound and design of these headphones is impressive enough to hold their own against the reigning champ of DJ headphones, the V-Moda Crossfade M-100s. And even though the 24Ks aren’t quite as sonically flexible as the M-100s, they certainly make up for it by way of their flashy gold overlays and the uniquely designed ear cups that rotate backward on a vertical axis instead of horizontally like we’re used to seeing with popular DJ sets. Which one you go for is ultimately your buying decision, but we’re certainly fans of the Monster 24K headphones — they combine brazen good looks with a loud, detailed sound stage that everyone can appreciate.

You might assume, as we did, that a bulky headphone like the 24K would weigh as much in literal mass as their sounds pencils out to on paper. Well, they’re actually pretty lightweight, with padding on the underside of the headband that takes the pressure off the top of your head and provides a cushioning layer if you want to wear them around your neck as an accessory, as so many people are prone to doing these days.

The ear cups are made of the same plush memory foam that we enjoy on other Monster headphones and give ample room inside the circumaural (around-the-ear) design for your ears to breathe. At this price range, we would have appreciated the ability to replace the ear cups when they wear out, but the as-is design makes do with the pair that’s glued on there, so keep that mind if longevity is a big concern.

On the other hand, the headphones do have a detachable cable that connects to the left ear cup, and the box includes an extrawide, coiled cable for DJs, as well as a thinner cable with a remote control and microphone to use with your smartphone. You also get a soft carrying pouch and a 1/4-inch adapter to plug into a mixer or a receiver for listening at home. While most Monster headphones are universally comfortable with a little adjustment of the headband, this particular headphone got mixed reviews around the office — most people felt fine wearing them, but fellow headphone reviewer and CNET editor David Carnoy couldn’t get them to sit snugly on his head. No headphone promises a universal fit, and the Monster 24K is no different, so be sure to visit your local retailer to try them on before you open your wallet. Going into this review, I felt skeptical about a pair of all-gold headphones because I’ve seen a few in the past that look terrible after a few months of use, with paint chipped off exposing whatever base coat is underneath. I’m always more attracted to subtle designs rather than making a bold, one-piece statement, but personal preferences aside, I can see why someone would pick these up in a store.

The shiny gold coverage is bright and doesn’t show too many fingerprints unless you look really closely, and the tough-looking hardware on the side does away with any reservations about its durability, which is definitely valued among DJs that travel everywhere with their gear.

DJs will also appreciate the ear cups that rotate backward and out of the way to allow for easy cueing and monitoring in the field. Most DJ headphones take after the venerable Sony MDR-V700DJ headphones that pioneered the swiveling design. Functionally speaking, I actually like the Monster headphones better for this purpose, since you still benefit from the comfort of the ear pads pressed up against your head while they’re up and out of the way. 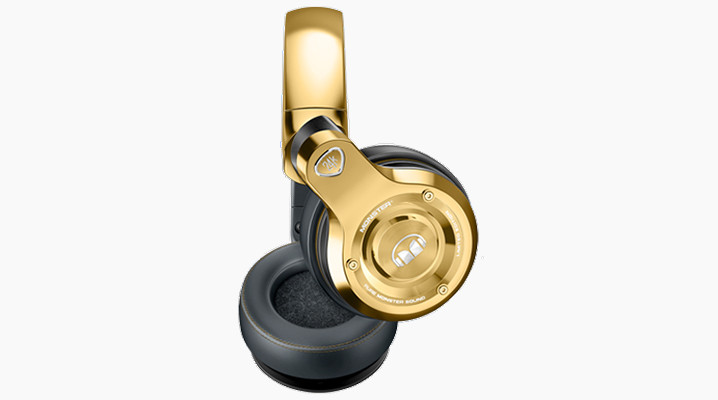 The Monster 24K headphones aren’t an active noise-cancelling design, which means they don’t offer a battery-assisted module to help block out noise, but it’s worth noting that with a secure fit and the music cranked up, they can provide ample blockage of ambient sounds. That’s equally important to DJs playing music in a loud bar as to commuters that just want to disappear (at least sonically) to the world around them. Be warned, however, that they’re not completely sealed, so music will leak out of them at loud volumes.

On that note, the headphones carry plenty of power to drive super-loud volumes from a smartphone or MP3 player without needing to use an external headphone amplifier. The internal drivers can also handle those volumes without distortion while piping in a wealth of rumbling bass and other tones on the low-end frequency spectrum.

If you’re struggling to decide between these and the Monster DNA Pro on-ear headphones, it’s really a question of how you value your music. Pick up the DNA Pros if you’re the type of listener that defers to the engineer and producer to serve your music the way they intended it to sound on the record. The DNA’s signature is well-balanced and far less amplified than the 24K’s, with its striking highs and low frequency rumbles. 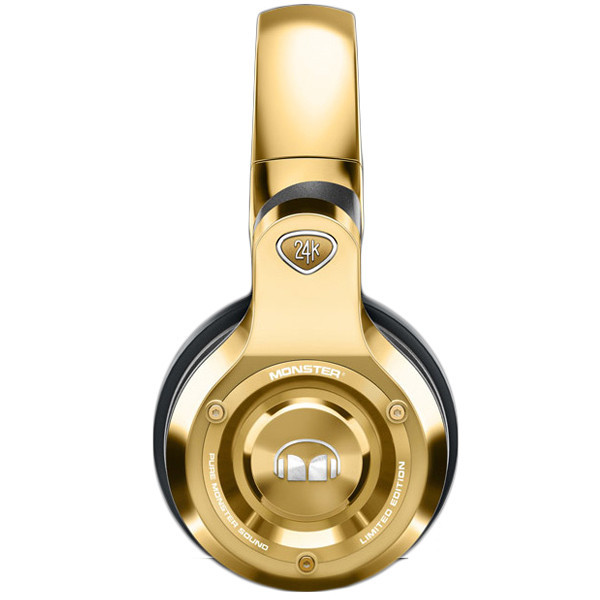 Like most Monster headphones, the 24Ks don’t go sparingly on the aggressive bass booms, but the company’s engineers are able to achieve it without sacrificing a clear treble snap, meaning you won’t miss out on the whip of a snare sound if it happens to hit on the same beat as a thumping 808. Of course, that sound profile works better for pop and dance tracks, but something tells me that jazz and classical fans aren’t as likely to be clicking through this review.

The Monster 24K headphones are worth their weight if you’re shopping for a new fashion accessory, a flashy DJ headphone or both. They don’t usurp the V-Moda M-100s as my go-to pick for DJs, but their big sound profile and comfortable fit put them at the top of my recommendation list for casual listeners and sartorialists alike.