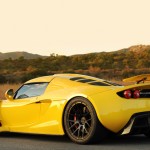 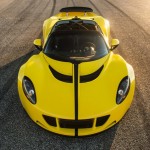 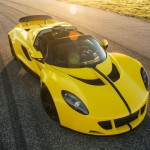 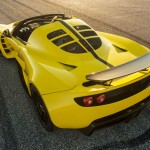 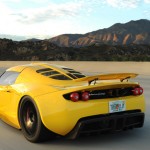 John Hennessey is at it again. The tuner announced that his company, Hennessey Performance Engineering, would bring a 2874-hp cocktail to this year’s SEMA Show: one part 1451-hp Venom GT Spyder, one part 774-hp HPE750 Supercharged Mustang Convertible, and one part 650-hp Velociraptor 650 Supercharged Ford F-150 Truck. For the 2016 Venom GT, Hennessey added 207 hp to make an even more ballistic 1451-hp output. This was done, in part, by upping the boost pressure of the twin turbos from 19 psi to 26 psi. According to Hennessey’s testing, the 2016 Venom GT’s projected 0-60 time is 2.4 seconds, the 0-100 time is 4.4 seconds, and the top speed is over 280 mph. That’s 10 mph faster than the Venom’s previous unofficial record of 270. “Being the fastest matters,” Hennessey said in the press release. “We are intent on keeping the Venom as the fastest, best performing, and most exciting hypercar on the road.” Hennessey has previously stated that he plans to keep production of the 2016 Venom GT to low numbers, so your chances of spotting one are even less likely than before.

Instead, the company will focus on the 290-mph-cracking Venom F5. In the release, Hennessey said that the Venom F5 will show the company’s improvements in straight-line acceleration and road-course handling. We’ve estimated the Venom F5 to cost more than $1.2M, but no details have been confirmed. Either way, what’s certain is that the F5 is going to go very fast, and whoever can afford it, will be very lucky.