Ladies and gentlemen, your sideways hero has returned. Ken Block has revealed the eighth instalment of his drifting, Gymkhana video series, and it’s a good one!!! 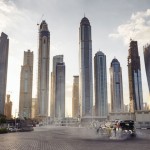 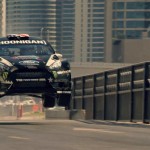 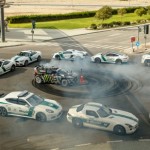 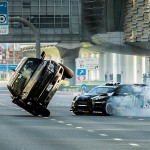 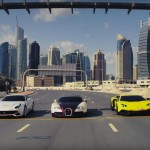 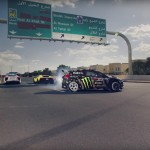 Fresh from showing off the special new reflective livery on his 650bhp, AWD Ford Fiesta RX3, Block has revealed the full video, dubbed ‘Ultimate Exotic Playground’. For this one, he’s flown to Dubai; there’s even a shot of Dubai’s famous fleet of super-police cars. Next to a chopper.

In fact, once he’s done firing up the Fiesta (and it sounds so good) , gets rid of his leopard co-pilot, and blasted his way through some sand, those police cars come in handy for boxing him in.

From there on in, Block’s up to his usual tricks. Donuting around a moving Ford Raptor that’s riding on two wheels, a drag race between a Veyron, Ferrari F12, Lexus LFA and Lamborghini Aventador (and he wins, holy shit), some jumps, and many more skids. Talk about living the Ruf.Lyf